The Neuengamme Concentration Camp Memorial offers a series of seminars for groups who want to explore the role of public institutions in Nazi Germany in relation to current human rights issues. The individual seminars focus on individual institutions and professions, particularly the police, public administration, the judiciary and the armed forces.

The following seminars and courses have so far been developed:

Further training courses:
Course modules on the judiciary, the armed forces, the police and public administration under the Nazis 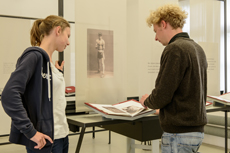 A student and a member of the Memorial’s staff looking at the biographical folder on Johann Trollmann in the exhibition “Traces of History. The Neuengamme Concentration Camp 1938-1945 and its Post-War History”, September 2012.
Photograph by Thomas Melchior 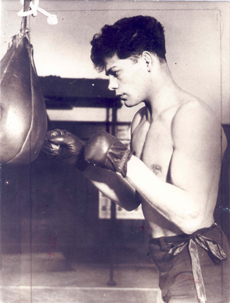 Johann Wilhelm Trollmann (aka “Rukeli”, b. 27 December 1907), a professional boxer, was persecuted as a Sinto under the Nazis. He was imprisoned in Neuengamme in 1942 and probably died in 1944 in the Wittenberge satellite camp. Undated photograph, courtesy of the Neuengamme Concentration Camp Memorial archive, 2005-3180